Like I had mentioned on my main site, I will start to use LaTeX (the mathematical and scientific typesetting system) for the mathematical entries on this WordPress site.  Although it can be bypassed for precalculus and earlier topics in calculus (due to simpler formulas that can be inputted through a word processing system), it will be very helpful (even necessary) for upper level mathematics when organization and structure is integral to writing proofs and problems.  In my work it makes it a lot easier to write the information clearly on documents using LaTeX so hopefully the final results written here and on the pdf of the handouts can be useful for you!

I worked with a student a few days ago, and I helped her with topics in trigonometry.  Since trigonometry provides a foundational background for courses such as physics and fields such as engineering, having a firm grasp of the concepts is important.

The next planned precalculus handouts will cover trigonometry and exponential and logarithmic functions.  Calculus courses that start off with transcendental functions (functions which aren’t algebraic such as trig functions) already assume familiarity with trigonometry.  As a result, I am going to map out the trigonometry handout since it can get easy to get lost when delving deeper into the subject (this usually happens when graphing a trig function or working with inverse trig functions).

haha hopefully that doesn’t scare you!  It’s not too bad, I promise 🙂

Now that we got that out of the way, let’s begin our lesson on Analytic Geometry!

A Cartesian (or coordinate) plane is formed when two real number lines intersect. The horizontal x-axis and the vertical y-axis intersect at right angles. The origin (0, 0) is the point of intersection for the x- and y- axes.

As a result, the plane is divided into four (4) quadrants. 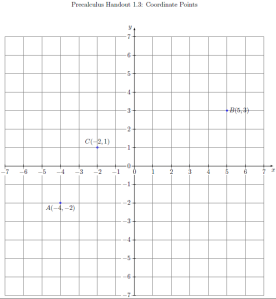 If you remember from Euclidean geometry:

The Pythagorean Theorem states that in a right triangle, the sum of the squares of the lengths of the two sides (a2 and b2 respectively) equals the square of the length of the hypotenuse (c2). 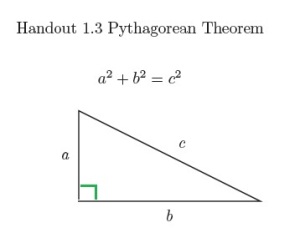 By application of the Pythagorean Theorem,

The distance formula is given by:

Let’s now apply this through an example.

Now let’s apply the distance formula for other situations.

Let x be an unknown coordinate in point B.

The solution is x = 3. The coordinate for point B is (3, 8). When we use the distance formula, we can verify this solution.

The midpoint of a line between two points is calculated with the formula:

Equations of a Circle

We can also extend the applications of the distance formula involving the equations of a circle.

The set of all points equidistant from the fixed center point on a plane form a circle.

The radius of a circle, r, is the distance between the center point (h, k) and a point found on the circle (x, y).

We will now look at an example where the center does not lie on the origin.

The point (6, 8) is located on a circle whose center is at (4, 4). Write the equation of this circle in standard form.

Step 1: First we will need to find the radius of the circle using the distance formula.

(You can also write it as

if you prefer, but in any case we will get the same answer in the end)

The standard form of a circle with a center at (4, 4) and a radius of

The standard form of the equation:

General Form of the Equation of a Circle

If p < 0, equation does not have a graph

If p > 0, the graph of the equation will be a circle

Let’s look at an example to examine the method of completing the square.

Given the general form of the equation of the circle:

Write the equation in standard form and sketch its graph.

In our example, the coefficients are 4. We will need to divide everything by 4. Once we do that we will have:

. We then square the

to complete the square.

The coefficient of x is

. We then square the

to complete the square:

to the right side of the equation!

For the left side, we simplify the equation and write it in standard form:

, we just convert and add.

Now we put it together to write it in standard form. 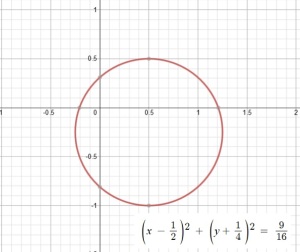 Hello everyone, I hope you are all doing well!  Continuing with the revisions, we will now take a look at licensing and standard of care for the medical and health professions.  One issue that confused many of my past students was the difference between endorsement and reciprocity regarding licensure so I covered that here.

As always, if you have any questions, you are more than welcome to let me know and I will be happy to address them.  Thank you again for the support and I wish all of you the best.  To my followers, I do have comments that I will be posting soon on your respective blogs because I usually gather my thoughts before typing (that’s the academic mindset hammered into me after all of my years in school haha).

Legal Applications to the Healthcare Professions

Physicians and healthcare professionals must provide a professional standard of care to their patients and fulfill specified duties and obligations to their employers.

Medical practice acts are laws governing the practice of medicine for each state in the United States. These acts detail the requirements for licensure (such as mandatory education and training), the scope of practice for licensed physicians in their state, what actions and behaviors can result in a suspension or revocation of their license, and mandatory reports that must be provided to the government and outside agencies (for example, a pediatrician reporting suspected child abuse to Child Protective Services when he or she notices bruises during a physical examination).

Regarding the final point about reporting to agencies, it is not within the physician’s duties to determine whether a suspected case constitutes abuse and/or neglect or delve deeper into the actions of the parent or guardian. He or she just needs to report any suspicions to the appropriate trained professional. The physician should speak to a professional such as a social worker who is trained to investigate these cases.

Medical practice acts were established to protect the general public from individuals practicing medicine without a license or fraudulent behaviors by quacks (people who practice medicine by pretending to have the necessary credentials that he or she does not have).

The state medical board oversees the licensure of physicians and has the authority to revoke or reprimand physicians for inappropriate or illegal conduct. Similarly, the professional boards in other healthcare professions such as nursing and pharmacy oversee the licensure for professionals under their jurisdiction and set the requirements to be licensed to practice in their state.

While there may be minor differences between states regarding duties for these professionals, the acts determine the general functions that licensed healthcare professionals can perform.

To summarize the functions of the medical practice acts:

We will examine three ways in which state boards approve and grant licensure to qualified professionals.

In the United States, the USMLE (U.S. Medical Licensing Examination) is a professional licensing examination introduced in 1992 and is normally taken by graduates from accredited medical schools to be able to practice medicine.

The Federation of State Medical Boards (FSMB) and the National Board of Medical Examiners (NBME) handle issues pertaining to medical licensure, disciplinary actions, and assessment of physicians’ work in the United States.

A physician is granted a license by:

International medical graduates (IMGs) have to fulfill similar requirements as U.S. graduates. IMGs must meet the requirements of certification by the Educational Commission for Foreign Medical Graduates (ECFMG Certification) in order to be licensed to practice medicine in the United States. A few requirements include successfully completing USMLE and satisfying the requirements regarding medical education and credentials.

Reciprocity is when there is a mutual agreement between states to grant a license to a professional who currently holds a license in another state so that they may practice in the state they are applying to. The physician won’t be required to take any additional examinations.

Differences between Endorsement and Reciprocity

It can be confusing deciphering between endorsement and reciprocity so here’s a short summary:

Endorsement means that an individual has successfully passed their board exams, holds a license in their current state, and is now applying for a license to practice their profession in another state. The board will review the current credentials of the licensed individual and perform a background check to ensure that everything is in order (current license is active and valid, individual is in good standing in the state they are currently licensed, any additional requirements- additional training/refresher courses or documentation are fulfilled, and fees are paid).

On the other hand, reciprocity is when an individual licensed in another state is given permission by the state board to use their current license to practice in their state. The boards of the two states will have an agreement that they will accept the credentials of the individual seeking a license by reciprocity as long as that individual fulfills the requirements of the agreement.

Since there is an agreement that was established between the two states, a professional can practice with their current license in the new state without having to have their credentials re-reviewed (unlike endorsement). Each state within the agreement extends the privileges to the professionals of the other state (and vice versa).

Continuing medical education can include:

It is illegal for a physician to practice medicine without having an active license. This also applies to healthcare professions requiring licensure such as nursing or pharmacy. Practicing with an unrenewed, expired license is considered practicing without a license under the law.

There are a few exceptions to the requirement of having a valid state license to practice medicine within a state. Some of them include:

Examples of professional misconduct include:

Just as we had discussed in an earlier handout regarding due process, physicians and healthcare professionals are entitled to have certain procedures followed when they are charged with professional misconduct.

The board may temporarily suspend a physician from practicing medicine if the charges are potentially harmful such as a criminal charge (attempted rape of a patient) or drug impairment during work (such as using narcotics and then working with patients).

Standard of Care in the Health Professions

Standard of care is the ordinary skill and care that healthcare professionals use when caring for and treating their patients. The standards set by their state licenses and certifications determine the appropriate care that a reasonable professional would use in similar circumstances.

This simply states that professionals must perform their abilities with similar high standards of professional competence throughout their work. Whether it is a physician in Florida versus California or a nurse in Maryland versus New York, their professional expertise and care match those that a person in reasonable standing would use when handling patients.

Although physicians don’t have an obligation to treat everyone (unless an emergency arises), they must always apply a professional standard of care when they do work with a patient. This includes not performing procedures that a reasonable person would consider harmful or potentially dangerous. Physicians are also expected to utilize any available resources that can assist a patient’s treatment. However, exposing patients to unnecessary testing and procedures can be detrimental to a patient’s care.

The prudent person rule , also known as the responsible person standard, states that the healthcare professional must provide the necessary information that a prudent, reasonable person would need in order to make a decision about whether they will agree to or refuse medical treatment.

The physician and other healthcare professionals such as nurses will discuss treatment issues with patients, their families, and guardians. Information that the healthcare team will provide include:

Throughout all of this, healthcare professionals must maintain a professional standard of care just as we had discussed in the previous section.

You can download the PDF version of this Handout Here